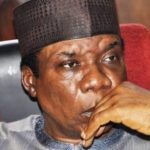 Kakwagh Ngunan, an Economic and Financial Crimes Commission (EFCC) witness, narrated to the court on Monday how Senator Bassey Albert while serving as a Commissioner for Finance in Akwa Ibom State, received vehicles as gifts from Olajide Omokore.

Senator Albert is being prosecuted by the EFCC before Justice Agatha Okeke of the Federal High Court sitting in Uyo, Akwa Ibom State, for his alleged involvement in offences bordering on money laundering and being in possession of six vehicles worth N204 million, at the instance of one Olajide Omokore, whose companies allegedly executed over N3 billion contracts for the Akwa Ibom State government.

While being led in evidence by the prosecuting counsel, M. S. Abubakar, Kakwagh, an operative of the EFCC, told the court that her team traced about N3 billion payments from the Akwa Ibom State government and the Inter-Ministerial Direct Labour Coordinating Committee, IMDLCC, to the accounts of Canwod Dredging Company Limited, Bay Atlantic Limited, Sahel Engineering, Power Nigeria Limited and Network Services Nigeria Limited – all linked to Jide Omokore.

She said her team, “requested for statements of accounts from Stanbic IBTC bank and Access bank regarding these companies, and as soon as the banks obliged us the statements, we invited the alter ego of the company, one Olajide Omokore to come and explain why those companies received so much money from Akwa Ibom State government and the IMDLCC”.

According to the witness, when Omokore responded to the invite, he informed the investigation team that the payments were for contracts executed for the Akwa Ibom State government.

The witness further told the court that several documents were recovered when a search warrant was executed at the office and residence of Omokore. The documents included; contract papers from the Akwa Ibom State government to Network Services Nigeria Limited for the supplies of bullet proof vehicles and invoices from Skymit Limited in the name of Bassey Albert and Olajide Omokore, as well as delivery notes for the vehicles in the name of Senator Albert.

“My team further traced monies from Omokore’s company account to the account of Skymit Limited, and when we invited Skymit to tell us the reasons for the money, we were told that it was for the purchase of vehicles. So, my investigation revealed that the accused, while he was the Commissioner for Finance and Chairman of the Inter-Ministerial Direct Labour Coordinating Committee IMDLCC, Omokore and his companies received monies from the Akwa Ibom State government and the IMDLCC. Also, that Omokore bought cars from Skymit Limited for the accused”, the witness said.

The witness also added that in the course of her investigation, her team wrote a letter to the Chairman of the IMDLCC, requesting for the details of all contractors and projects carried out by the Committee but did not receive any response..

Others are Letters from Skymit Nigeria Limited addressed to the Chairman of the EFCC, with attached invoices and delivery notes of vehicles; copies of Skymit Limited Skye bank statement of account; statement of accounts of all the above mentioned companies from Stanbic IBTC, Access bank and Skye bank and a copy of request letter from EFCC to IMDLCC.

The court admitted the documents in evidence and marked them as exhibits P2 to P11.

The matter was adjourned till December 7 and 8 2020, for continuation of trial.

Detention of Ndume while Abaribe is free is injustice —Arewa Youths

2023: Gov Umahi opens up on contesting presidency, reveals how PDP can shame him

Ebonyi State Governor, David Umahi has opened up on the speculation that he may contest …