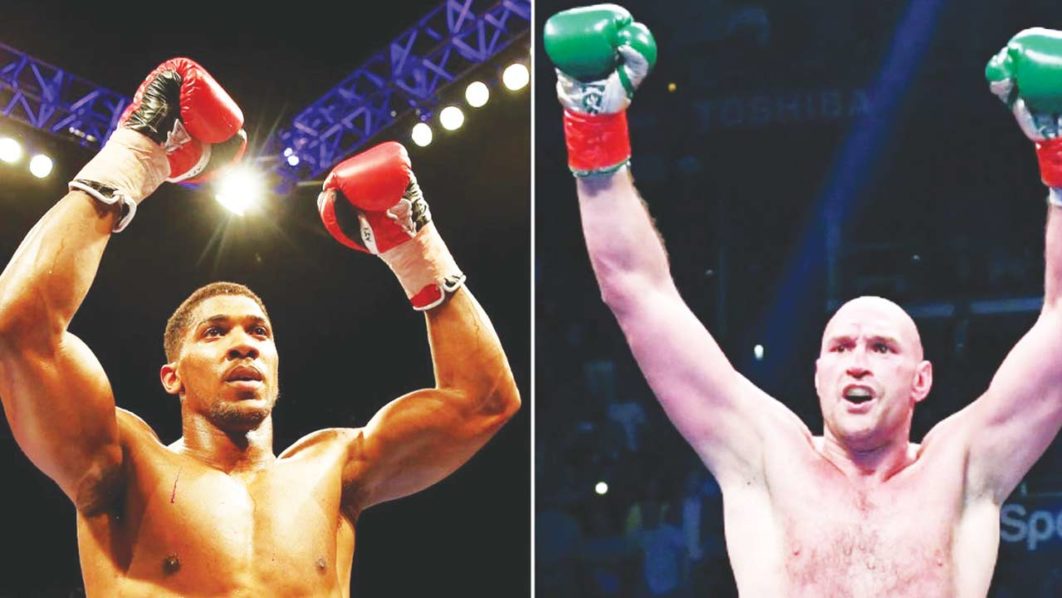 ‘The knee is good, I am in full training’

World WBA, IBF, WBO and IBO heavyweight champion, Anthony Joshua, doesn’t know what anyone sees in WBC champion Tyson Fury, reports iol.co.za. The two Brits are slated to meet in a much-anticipated unification bout should they win their next fights, and Joshua has decided to have an early go at his rival and compatriot.

According to Joshua, Fury, who beat American Deontay Wilder earlier this year, hasn’t done enough to earn the respect of the boxing world.
“What have you seen from Fury? A couple of feints? Moving around? What have you seen that makes him so intimidating? Speed? Joshua asked in an interview with Sky Sports.

“If the sport is lacking so much talent then all you need is feints and movement to be classed as a great of this generation.“With hard work, motivation and studying you can overcome that. So what do people see in Fury that is so fearsome, intimidating, that he can’t be touched at the top level?

“I take him as a serious challenger, of course. But resume? It’s taken him a long time to grow. His fight with Wladimir Klitschko was his first real challenge and he overcame it, but it took him eight years to build his experience and confidence.

“Then he had two years out and fought Deontay Wilder.“He hasn’t been in the deep end for long enough to show me that he can swim there for a long time. You have to continually prove that you belong there. You don’t just come there once or twice.

“For me as a fighter, that’s how you gain my respect,” said Joshua. Meanwhile, Joshua has made it known that he doesn’t have any further issues with his knee and feels physically in order to move forward with a mandatory defense against Kubrat Pulev, according to boxingscene.com.The fight with Pulev was scheduled for last month, but postponed due to the coronavirus pandemic.

A few weeks ago, Joshua’s promoter Eddie Hearn revealed that his fighter had ‘tweaked’ his knee, but no surgery would be required. Joshua is currently in full training and is already making plans to secure sparring partners.

“The knee is as good as it can be,” Joshua told Sky Sports. “I am in full training. I didn’t stop training even when I had the knee.“I’m sure many of my social media followers saw me on the heavy bag sitting down. I’m standing up now. I’m on two feet and I’m sure we can start sparring, so I’ll be looking for some sparring partners in about a week or two to start training camp.”

The IBF, due to the coronavirus pandemic, is not applying pressure on Joshua to fulfill his mandatory obligation.While the fight with Pulev is being targeted for the end of the year, there is no final determination on when or where the contest could take place.

“Given the current circumstances we are being flexible. It is difficult to put a firm date on mandatory obligations at the moment. Everyone is working hard to get things going with boxing again and hopefully everything will be on track soon,” an IBF representative said in a statement. Joshua was last seen in the ring back in December in Saudi Arabia, where he outboxed Andy Ruiz over twelve rounds to reclaim the world titles.

Doedee out for season in another Crows blow

‘I wasn’t comfortable with it’: McGregor’s last straw at the Dragons

Despite various reforms to address the extensive issues in the health care system, the country’s …