Ecuador’s entry for the 2021 Academy Awards’ International Feature section is a surprising movie, highlighting a story that up to now has been little-known. Titled Vacío / Emptiness and directed by self-taught filmmaker Paúl Venegas, the work focuses on how increasing numbers of Chinese migrants have ended up in Latin America over the past 15 years, and it features a cast of mainly non-professional actors – speaking Mandarin, Spanish, English and some Cantonese.

Even viewers familiar with stories of migration will find this an unexpected look at the issue, after decades of news articles about Europe and the United States. The migrants here are Chinese individuals arriving clandestinely in Ecuador and other Latin American countries, trying to make a living while dreaming of going elsewhere, and speaking not a word of the local language. 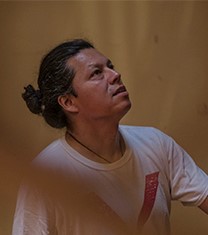 This is Venegas’ first feature (after producing several documentaries since 2003), and he clearly draws on his own Ecuadorian background as well as his time living in Asia, where he worked in finance in the Philippines and China. Viewers get a sense of both worlds, the one the characters have fled for various personal reasons, and the new one that is merely a way station for some but still filled with peril for the “paper-less”, the undocumented.

The film follows Lei (Fu Jing) and Wong (Lidan Zhu) who arrive clandestinely in Ecuador after having met on a packed boat heading to what they think will be a land of opportunity. Lei’s objective is to get to New York, while Wong’s aim is to make enough money working so that he can bring his 12-year-old son from China to South America.

Before long, we see them falling into the hands of a seemingly charming but sinister individual, the bipolar gangster Chang (Meng Day Min), who has his own devious agenda, especially as regards Lei. They will have to figure out a way to escape, helped by friends including a fun-loving, good-hearted young Ecuadorian (played by Ricardo Velastegui) and an older immigrant (Yin Baode), who himself yearns to return to his homeland. Yet, even if escaping should prove successful, perhaps this won’t change their fate of forever having to live in the shadows.

Vacío could have been an unbearably bleak movie if Vinegas hadn’t pulled back from leaving the main characters in despair. With his cast, we get a depiction of the many hazards of migration, but also a message of optimism. Lei’s dream could take a long time to be realized; still, she may eventually get to New York and follow the career path she has set herself.

In a videocall, Vinegas told SWAN how and why he made Vacío (which had its première at South Korea’s 2020 Busan International Film Festival in October and has already won awards in Latin America). The edited interview follows.

SWAN: Migration is a universal topic, but your story is special because not many know of this particular movement of people. Can you tell us about the background?

Paúl Venegas: Well, Chinese communities have been migrating all over the world since more than 150 years. In Ecuador and Latin America in general, they started arriving about 120 years ago. Lima (Peru) has a huge Chinatown. They were brought as coolies to work on the Panama Canal too. And then there have been waves of immigration to countries in southeast Asia, for instance. I remember in Cambodia, literally in the middle of the jungle, I found a Chinese community that had been there for over a hundred years. They were farmers. They were just hidden somehow.

So, there’s been this spirit of always leaving … something that has permeated the culture.

Regarding the script, my co-writer (Carlos Terán Vargas) studied filmmaking in Cuba around 2005, and he began to write a script about Chinatown in Havana, because in the late 1800s, there were Chinese helping to fight the war of independence of Cuba. So there’s this long history, and when we met in 2008, I was already going back and forth to Buenos Aires, Argentina, for my work, and whenever I went to a corner shop, it was run by an Argentinian. But as the years went by – and starting around 2012, 2013 – all of a sudden around 99 percent of all these mid-size supermarkets, across all neighbourhoods, became run by Chinese, to the point that nowadays you don’t say I’m going to the supermarket. The expression translated from Spanish in Buenos Aires is: I’m going to the Chinese. It’s amazing.

So, I started observing this phenomenon, and seeing the same thing happening in São Paulo, also in Madrid, in Milan, in Valencia. I took inspiration from what’s happening all over the world, and the script developed and changed.

SWAN: And in Ecuador, specifically?

PV: Here particularly, in 2008, the government opened up the borders completely. You didn’t need a visa, and a lot of nationalities came in, using this as a transit point for the traditional migration to the United States. A lot of Asians came, and also people from Ghana, Cameroon, Nigeria, and from the Middle East as well. They’ve come in large numbers to Ecuador. They stay a few weeks, and then they go to the United States by land or other ways. But a lot of them will also stay and go to southern cities like São Paulo or Buenos Aires.

In 2008 to 2009, around 30,000 Chinese nationals came to Guayaquil (the second biggest city in Ecuador) especially, and it’s said that around 20,000 of them stayed, and they began to enlarge the already existing Chinatown – which had been there for generations but without the name. Last year it was recognized that there is a Chinatown, but even today, when you speak to people from the city about this, they say: What? Where’s the Chinatown? What I mean to say is that Chinese migration is very low-profile. It’s not marginalisation. They arrive under different conditions (from other migrants), and they arrive to already existing economic networks. So, it’s very silent, but it’s very permanent.

That is the interesting fact, I think, about the film – that people don’t realize … because they’re more aware of the terrible conditions of other migrations, with all the tragic things that we know. Still there are a few Chinese nationals now being caught at the border between Mexico and the United States, but not in the numbers compared to Latin Americans.

SWAN: How did you find the members of the cast?

PV: The casting process was one of the most interesting experiences I’ve had with this film. I’ve worked with natural actors before on projects with other directors, and it was always a good result. But it wasn’t my original idea for this film. I started out aiming to co-produce with China, so I went through the process of the Beijing International Film Festival Pitch Forum. I applied there in 2014 and the film won “best project”.

After this, many producers came on … so I started doing casting with professional actors, but they just demanded so much money – half a million dollars! After ten times of going back and forth to China, I gave up. It became so difficult. I said to myself, I’m gonna go for natural actors and do a casting in the Chinese community in Guayaquil. The first thing that we did is that I got in touch with the Chinese immigrant associations in Guayaquil. This was around Chinese New Year in 2017, and they invited me to take part in their celebrations, at big banquets in restaurants. There we were presented in society and we went up to the podium and talked about the film.

So, the word got out and the Chinatown doors opened to me. They used social media to announce the castings … and we did six months of castings and eventually we found the right people. They all have very interesting stories. I interviewed them extensively, and this gave me a deep insight into what human beings they were and what happened to them when they migrated to Ecuador or somewhere else. We rehearsed a lot, every day, and we watched a lot of Wong Kar-wai films – I do take a lot of influence from him, I like his cinema a lot.

The cast gave me feedback about things, too, about how to say certain things. So, we adapted the script, and I adapted the story to their personalities. (The natural actors include a teacher of Mandarin and a miner.)

SWAN: Coming back to the story, the ending is not as sad as one might expect. It could have ended in a much worse way, particularly where the women characters are concerned. You seem to have pulled back from that. Why?

PV: Well, the female character that I try to portray is, to me, this liberated, empowered woman of the new China that is basically somehow escaping chauvinism. It’s clear that she does what she wants, and she manipulates males, in a good way as I see it, to get what she wants. I wished to portray this character as someone that keeps going, even when she has all these things that could stop her. To me, the transition at the end is a metaphor, it’s not complete disappointment, but she is empty inside.

SWAN: It’s probably a good choice because we know of the other story, other endings.

PV: Yes, I didn’t want to fall into the typical abuse story. Actually, there are other films that have done that, by a director in France, for example, where the Chinese migrant character ends up in a prostitution ring. I know this happens, but I don’t see migration like that. It was not my point for the story I wanted to tell. I’ve migrated a lot during my life and I’ve gone through a lot of the emotions, and I’ve seen people go through the emotions. So, that’s what I aimed to do with the film. The criminal aspect is there but that’s not the main point.

SWAN: What do you want the audience to take from your film?

PV: To reflect on the harshness of migration, on these journeys that we go through, the emotions that we go through. I like to say that migration is like jumping into emptiness: you really don’t know what’s going to happen, so you take a jump into a hole, basically. And perhaps what I want to say to people is that: before you take that jump, to think about it, about whether you’re going to be better off in your home country with your own people.

I also think audiences will see that you don’t just migrate for economic reasons, you migrate for existential reasons too. And it’s hard, no matter where you go.

SWAN: And the Academy Awards? How do you feel about the film being selected as Ecuador’s entry?

PV: Of course, I’m very happy about that. It raises the value of the film for distribution and gives more awareness to my film career and to filmmaking in Ecuador. Hollywood is not my thing, and the film is a small film and probably has little chance of making the shortlist. But it gives the story a higher profile. And I’m already in the game, so I have to play the game.

Vacío / Emptiness is an Ecuador-Uruguay coproduction.

This article is published in association with Southern World Arts News (SWAN). 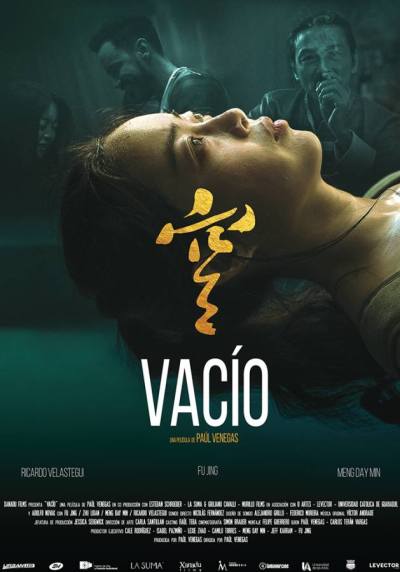